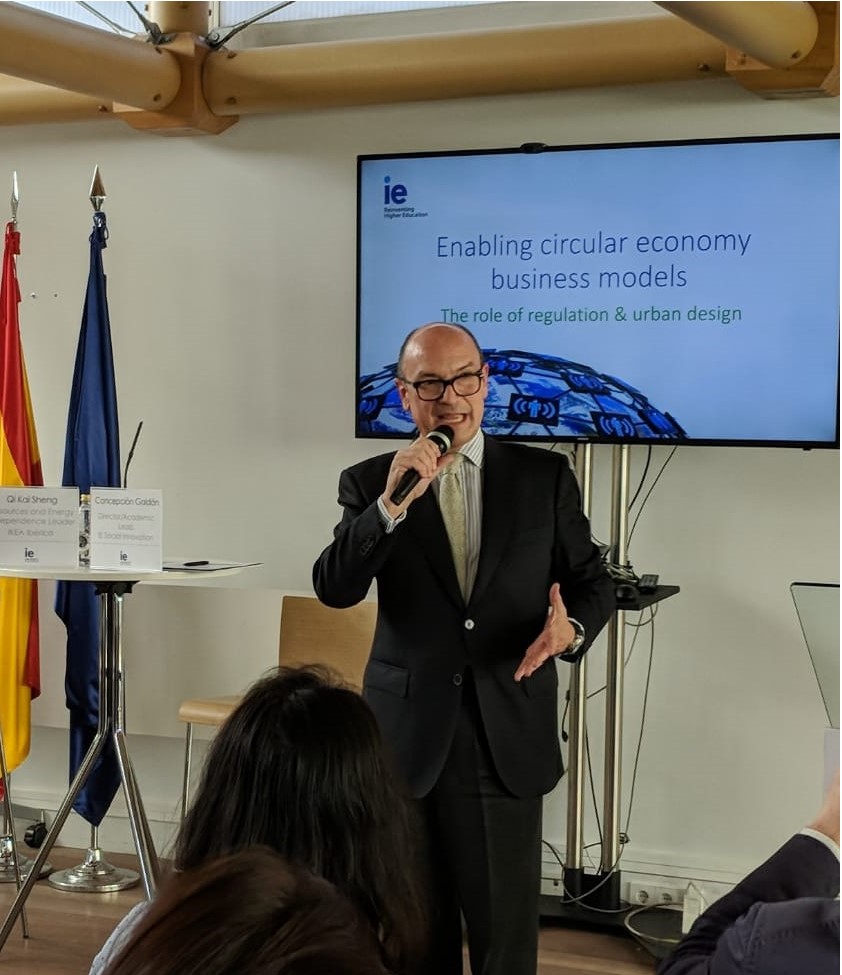 Posted at 11:54h in General by Conchita Galdon 0 Comments

Last April 26th 2018, the panel “Enabling circular economy business models: the role of regulation & urban design” took place at IE, in Madrid. An enlightening discussion with world-class speakers on the role of regulation and urban design on the future of the circular economy, essential to enhance the business perspective. The panel was inaugurated by the President of IE University, Santiago Íñiguez de Onzoño. The event counted with experts such as Javier de Cendra, dean of IE Law School, Cristina Mateo, executive director of IE School of Architecture and Design, Elena Ruiz, lead of Circular Economy Group at Forética or Alfonso Vegara, founder and president of Fundación Metropoli, among others.

Digital transformation, disruptive innovations, along with the fourth industrial revolution are restructuring industries, markets and social structures. These transformations offer great economic opportunities, as well as new tools to achieve growth in an organic and sustainable manner. New business models based on the principles of the circular economy can be the answer for large corporations and new emerging companies in their search for new ways of doing business. The regulatory and urban aspects are inextricably linked to create the framework that allows all these opportunities to materialize. Companies that understand the latest trends in these areas are best positioned to design profitable business models based on circular economy.

Santiago Íñiguez opened the event with a depiction of IE’s longstanding involvement in creating a more responsible and environmentally friendly economy. The building in which the event was held, Shigeru Ban’s Paper Pavillion, being an outstanding material reminder of what the institution stands for. Following Santiago’s address, Concepción Galdón and Totti Könnölä provided the framing of the event, defining and describing the concept of Circular economy. Their introduction set the stage for the intervention of IKEA Iberica’s Resources and Energy Independence Leader, Qi Kai Sheng, who presented IKEAs approach to the Circular Economy. The first panel focused on the regulatory and policy framework. Led by Javier de Cendra, the speakers, Pablo del Río, Elena Ruiz, Prof. Ludwig Kramer and Ana Barreira, provided a comprehensive view of the regulatory advances and challenges at the Global, European and National levels. The second panel, led by Cristina Mateo, discussed the role of Urban Design and the territory in making the circular economy possible. Totti Könnölä, Alfonso Vegara and Stefan Junestrand offered an exciting and ambitious projection of the near future, where technology allows for a completely new approach to our relationship to the built and natural environments.